What started as an attempt to have an offer in every price segment has become a near-flood with a multitude of telephones that seem to overlap in their options and price. To say that Samsung is already too aggressive in its mid-range strategy would be an understatement. The Samsung Galaxy M40 is yet another mid-range, one that places more emphasis on design. Well, here is our Samsung Galaxy M40 Review.

Amid growing homogeneity among mid-range smartphones (and in particular Samsung), the Galaxy M40 breaks the monotony by introducing a display-hole design in this segment. The Infinity-O recess, previously seen on the Galaxy S10e, is just as impressive here and comes across as less shocking than a now old-school notch. 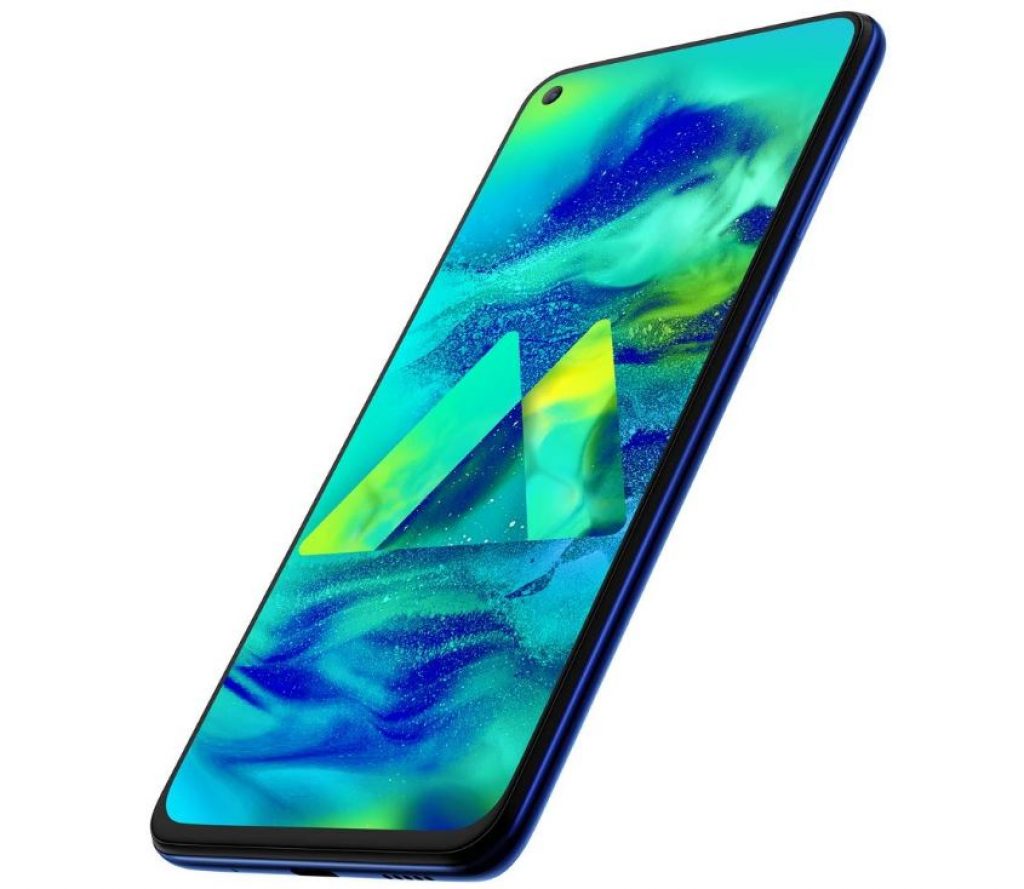 The 6.3-inch display takes over most of the front with reasonably minimal edges on three sides. The chin along the bottom is slightly thicker but does not seem so intrusive. You may notice the lack of an earpiece on the top edge. The Galaxy M40 uses “screen noise” technology to turn the display area into a speaker. Although I could hear the caller on the other end of the line without any problems, the audio output sounded slightly hollow and tinny.

If you always have the phone in your hand or spend a lot of time calling and surfing the internet, you know how important hand feeling can be. The overall dimensions of the Samsung Galaxy M40 are small enough to keep the phone very comfortable. In fact, I would even say that this is perhaps the most comfortable device to use in the recent harvest of Samsung smartphones. The weight of less than 170 g certainly helps here.

However, not everything is positive. First, the telephone lacks a headphone connection. The phone comes with USB-C earphones in the box, but that does not make up for the missing port. Subsequently, the polycarbonate material used for construction is a fingerprint and slide magnet. In our week or so of use, the phone started to show small scratches. I suspect that it will not be too good with long-term use, which makes a quality item a mandatory purchase. 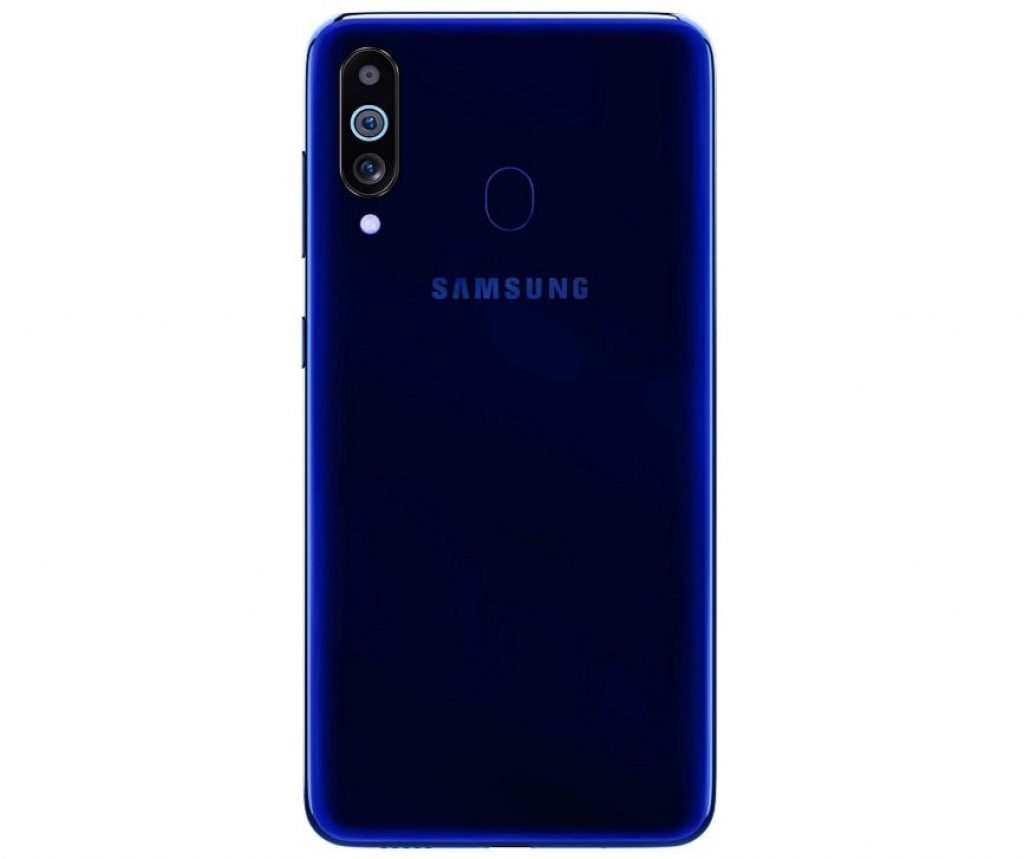 In contrast to the Samsung Galaxy A50, the M40 has no in-display fingerprint reader. You will receive a fingerprint scanner mounted on the back instead. It goes fast, it works fine, and I doubt that many will complain about it. If you prefer, there is also support for face recognition unlocking, although this was noticeably slower than using the fingerprint scanner.

The entire construction of the phone is polycarbonate and it feels pretty good. The buttons offer sufficient feedback, although they are not as tangible as those on the Redmi series from Xiaomi. No, the phone has no official IP rating and there is no P2i coating, so you want to be extra careful when using your phone near water.

The telephone uses a gradient pattern in the polycarbonate. Instead of the more usual transition from top to bottom, the color shift pattern is completely at the edges. All in all, while the Galaxy M40 wins in the design department, it is clear that a number of compromises had to be made to get here.

It is not an OLED panel, but the screen on the Galaxy M40 is pretty good. Color is nicely saturated and multimedia content looks great. The standard tuning is wrong on the side of oversaturation and this is far from the most accurate panel around. That said, it’s pretty clear and we’ve measured peak brightness levels around 420nits, which makes this a good choice if you find yourself using your phone often outside. 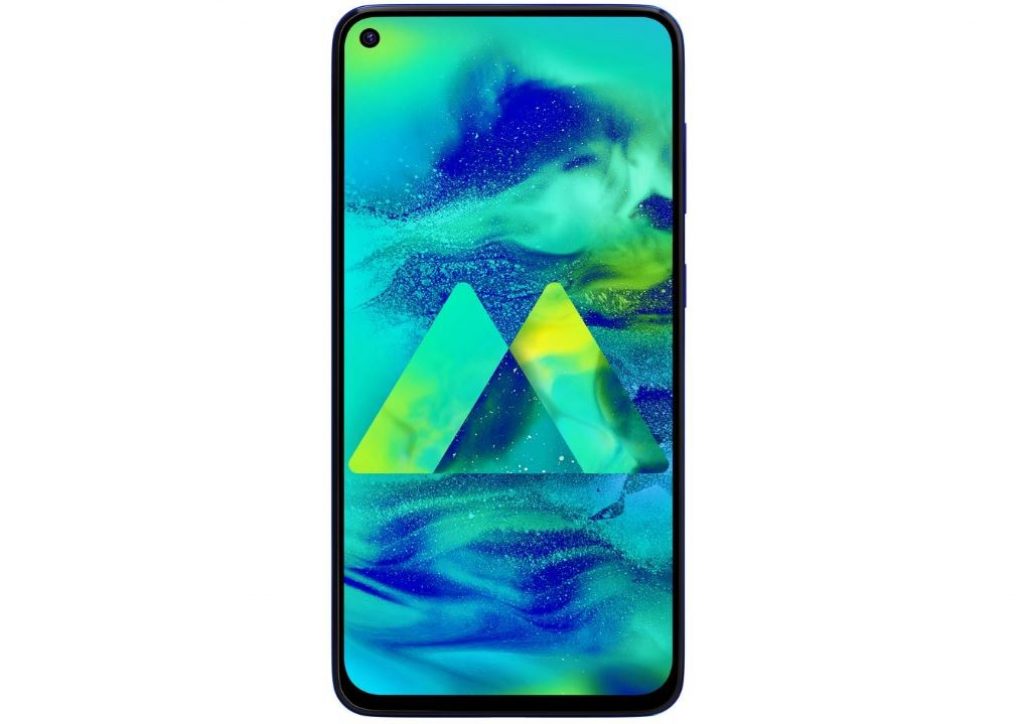 Unfortunately, Samsung offers no way to switch to a more natural color match, such as on competing devices. The LCD screen is also not as faint as Samsung’s own AMOLED toting Galaxy M30. The black levels don’t come close to the latter, which is a bit of a shame given the premium price of the smartphone. Yes, the phone supports the Widevine L1 DRM, so you can view Full HD content from streaming services.

The Samsung Galaxy M40 runs Android 9.0 Pie with Samsung’s One UI 1.1 layer on top. Over the years, Samsung has made significant progress in reducing visual clutter and bloating to make this a really enjoyable take.

From the gestures to the usual additions spread across the interface, One UI on the Galaxy M40 is very intuitive for a new smartphone buyer while offering enough horns and bells to old users. With the standard start program, you can make adjustments, such as switching between a layout with an app drawer or an app in which all apps are on the home screen. The software offers a simple way to switch between screen sizes in case you want to increase the information density. 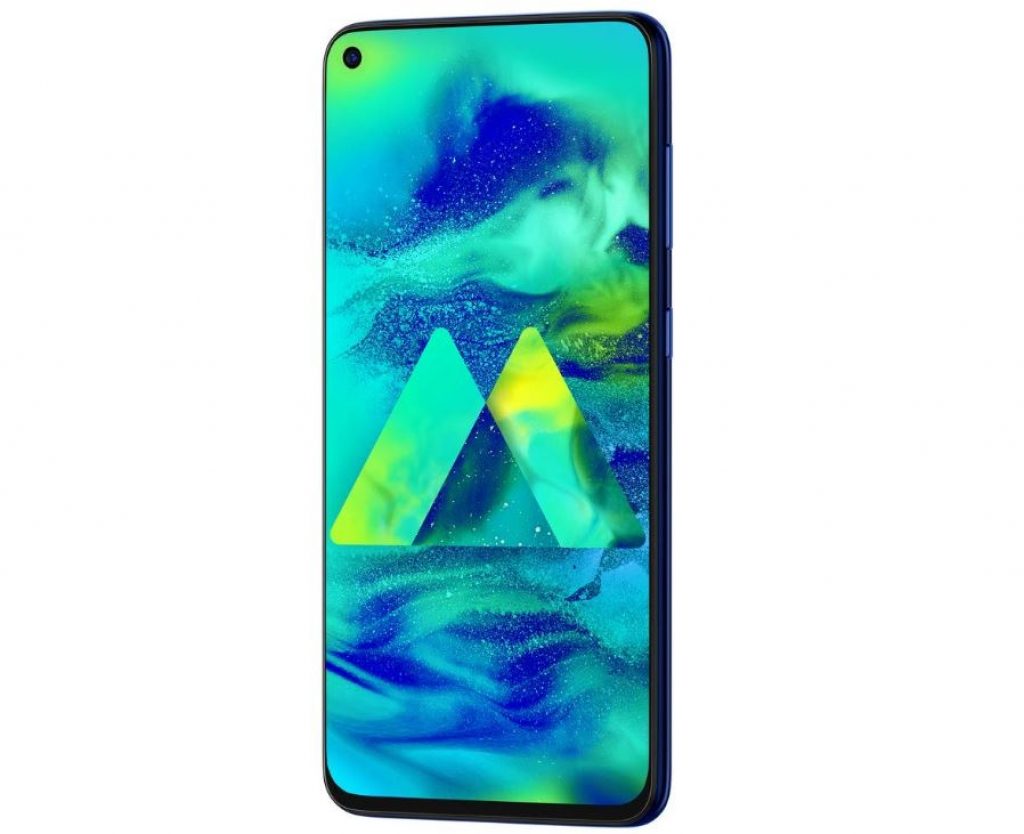 It’s good to see that Samsung has integrated some of the functionality of custom launchers into the standard launcher. The phone is not completely devoid of bloatware and contains a few additions, such as Samsung’s own Galaxy Apps app store, as well as third-party apps such as Hello and Daily hunt. It is possible to remove some of these.

As we mentioned earlier, the Samsung Galaxy M40 lacks a headphone connection. You will get a pair of USB-C headphones in the box, but no dongle is included. The audio output from the speaker is loud, but nothing worth writing home about. The mono speaker sounds scrawny and lacks depth. Due to the lower position of the speaker, it is likely that you will obscure it while playing a game or watching a video.

The Samsung Galaxy M40 has the same Snapdragon 675 chipset that we have seen in the Redmi Note 7 Pro. With 6 GB of memory and 128 GB of storage on board, the specification sheet is competitive in this segment of devices. It is possible to further expand the storage via the hybrid SIM slot. Samsung was uneven this year with the level of software optimization in its range. In contrast to the Galaxy M30 and the Galaxy A50, both of which offered a butter-friendly experience, the M40 felt slightly less refined.  Although not too shocking, there were cases where the phone dropped one or two frames while navigating through the interface. 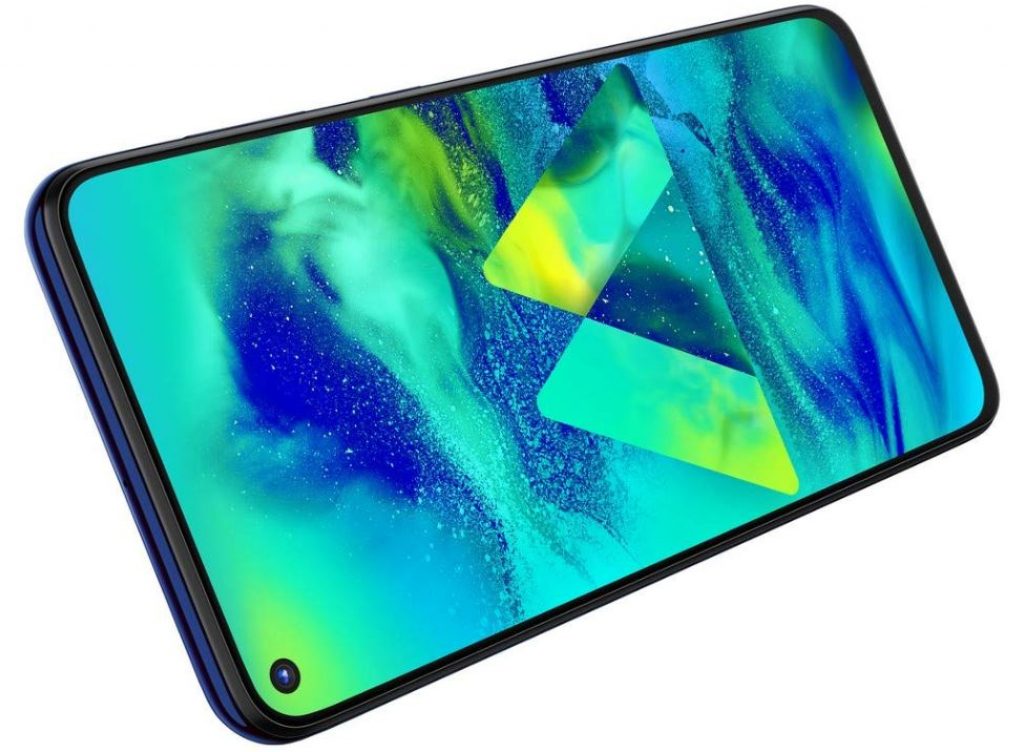 Given how good the experience is with other recent Samsung smartphones, I am pretty sure that the company will be able to smooth out these folds. Beyond that, the phone kept its own when it comes to multitasking and gaming. I played PUBG on the phone and the Galaxy M40 maintained a solid frame rate with the graphics display on HD. The phone touched warm, but never unpleasant. We have also performed a range of benchmarks to determine relative performance and you can view the scores below.

Multiple cameras are the taste of the season and the Samsung Galaxy M40 has four. The three sensors on the back of the phone offer a primary camera with a high resolution in combination with ultra-wide and depth sensors. No, you will not find a telephoto lens here. The camera does a pretty good job in capturing photos, although low-level details are often lost due to heavy noise reduction. That said, photos look good when viewed on the phone’s display.

Autofocus performance is certainly slower than you would expect. I also observed a short shutter delay, which can result in blurry photos if you do not remain completely still while taking the photo. This problem is exacerbated in low light situations, where it is particularly difficult to take perfectly sharp photos. The primary camera delivers 12 MP images from its 32MP sensor as standard, helping to reduce noise and improve low light sensitivity. 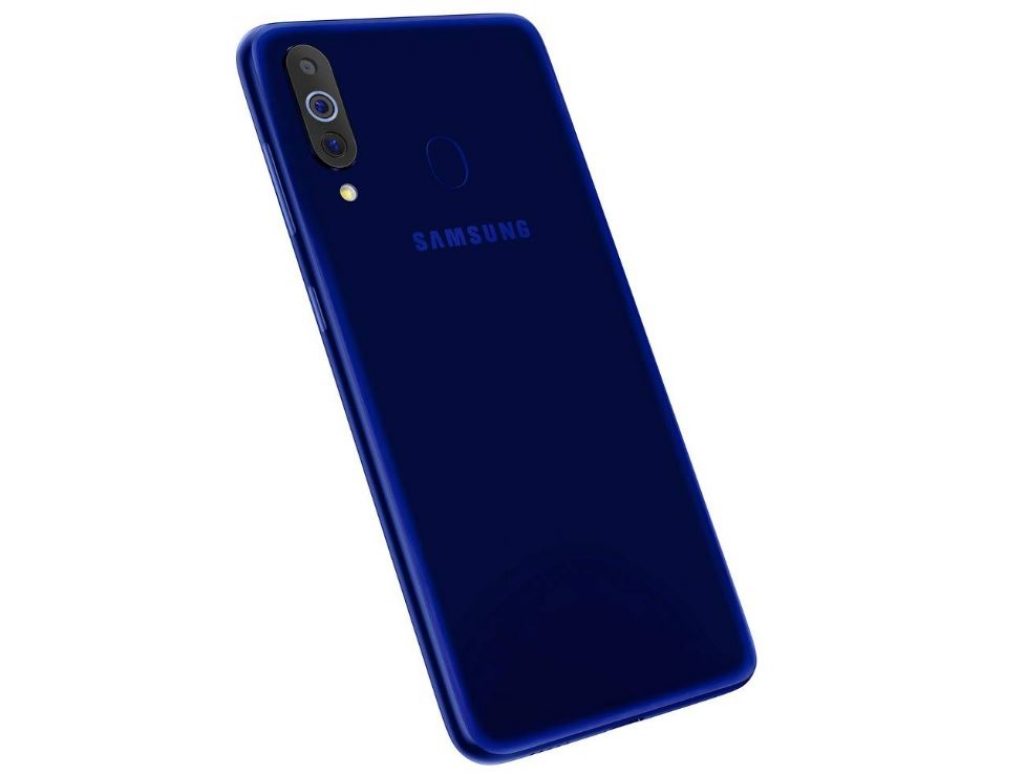 A clear problem with the camera of the Galaxy M40 is the tendency to overexposure the setting. Images become brighter than they really are and have a touch about sharpening along the edges. The wide-angle shots, in particular, illuminate the shadows. This provides a striking image, but pixel beeping reveals an increased amount of noise. The wide-angle camera has no autofocus capabilities and is best suited for capturing landscapes or architecture. The camera cannot catch the sun well and can sometimes cause significant lens flares.

I was not very impressed with the portrait mode on the M40. While the telephone had a reasonable task of identifying the person’s profile, dropping the bokeh was very artificial. Video capabilities on the M40 top-off at 4K at 30 fps, but the phone lacks any kind of stabilization, making capturing stable footage an exercise in frustration.

The 3,500mAh battery of the Galaxy M40 is smaller than almost any other device in this price range, which means that the phone is directly disadvantaged. Now Samsung claims that it has worked all day to optimize the phone, but that is the limit. While competing devices can drag the next day or even farther away, the Galaxy M40 runs out at the end of the day. The average break-in time fluctuated around five hours during my time with the telephone, which is noticeably worse compared to the competition. Charging the phone is fairly fast and you can finish it in about 96 minutes using the included 15W fast charger. 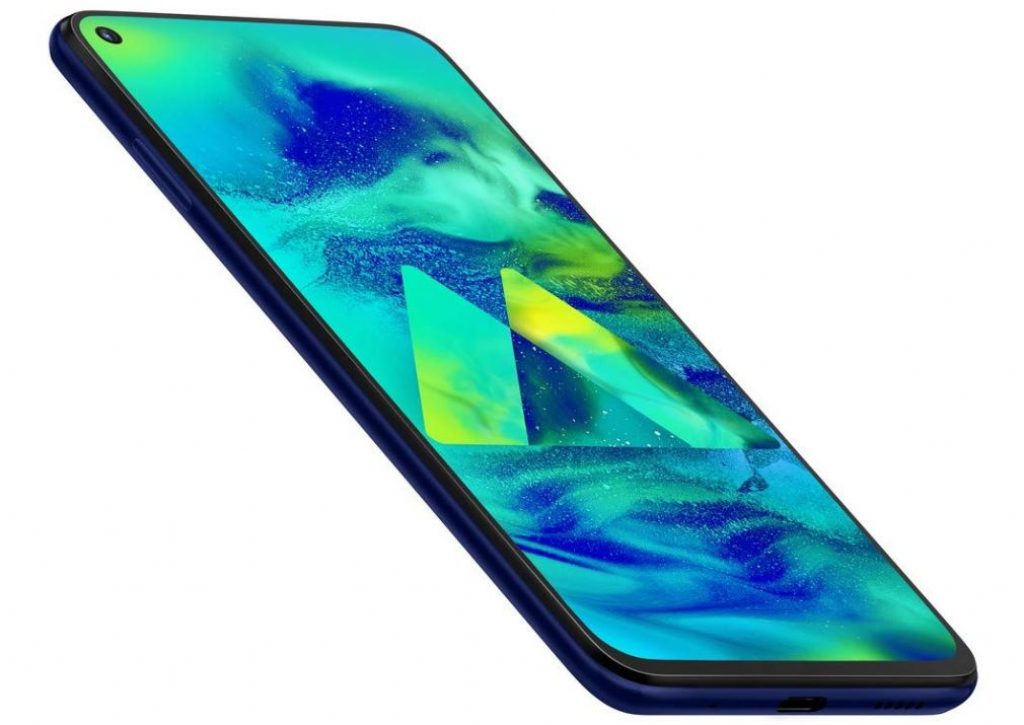 The Samsung Galaxy M40 is a good phone that just does not meet top quality. It is not quite the perfect package, but it is perhaps the telephone for you as a design appearance that scores higher than the overall performance in your books. What do you think of the Galaxy M40? Is this the phone that takes the crown off Xiaomi’s Redmi Note 7 Pro or is the smaller battery and weak camera sufficiently deterrent? Let us know your thoughts on our Samsung Galaxy M40 Review.

A really good package, the Samsung Galaxy M40 offers an excellent design, decent ergonomics and reasonably good cameras on the table. Dips in performance and medium battery life, when placed next to the competition, make up for the lack of perfection.